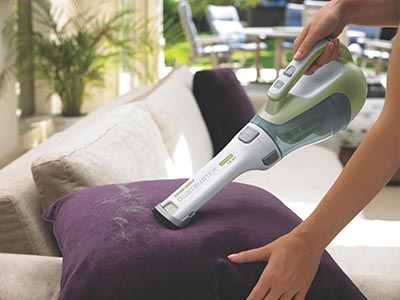 Small messes sometimes seem to happen so often that they can feel more overwhelming than doing a deep clean of the entire house.  Just imagine the crumbs that spray from cutting a crusty loaf of bread, the dirt when you accidentally topple a potted plant, or a spray of crunchy cereal flung by a gleeful toddler.  Or picture the scattered grains surrounding a cat’s litter box, getting tangled in the sticky strands of cobwebs, or even a suspicious looking bug that you’d rather not risk putting your hands near.

These are all perfect situations for a cordless handheld vacuum.  If the convenience of these miniature vacuums isn’t clear already, just ask yourself: would it be better to get out the old upright vacuum, bang it on walls and furniture and your ankles as you bring it to all of those small, everyday messes?  Or would you rather grab a conveniently mounted mini-vacuum and zip through them in matter of seconds?  Even if your answer is the former, there’s a fair chance you’d consider a handheld vacuum for cleaning out your car.   It’s the biggest nexus of pet hair, sand, and nooks and crannies, and it’s really not convenient to stretch an extension cord with an upright vacuum to get to it.

It is very easy, however, to carry a light handheld vacuum out to your vehicle.  The better handhelds will have crevice and brush tools – sometimes handily integrated into the vacuum itself – that work for both getting between the seats and for carefully dusting the console and stereo.  In the house, the brush attachment will similarly help with dusting more delicate objects and even with cleaning out keyboards, and the crevice tool can work wonders with baseboards and the tracks of sliding doors.

Even though handheld vacuums are smaller, they still need to do their job well, especially when a small mess can actually include heavier or bulkier items than mere dust, like broken glass and grains of rice – power is still important!  Look for how many volts a vacuum has to compare between them.

Given the intent of the handheld vacuum to be used for quick and small cleanup, length of runtime isn’t necessarily as important as it is for larger vacuums.  That said, a handheld that charges faster and lasts longer will still be better – you don’t want the vacuum to stop working when you’ve only gotten half the car done.  Vacuums with lithium-ion batteries are the best option in this regard.  They are better for the environment in using less energy by charging faster and being easier to dispose of properly than cheaper nickel-cadmium batteries (which are toxic and should be disposed of as hazardous waste).  And in a more immediately practical way, they are better because they do not have the dreaded “memory effect” that nickel-cadmium batteries have, which requires that a battery be drained all the way before recharging to avoid dropping the battery’s maximum charge.

When searching for a cordless handheld vacuum, you might run across some unusual specialized options, such as the Flex Vac, which has a four-foot extendable hose to help reach further, or the Pivot Vac that folds in half to be stored more easily.  These often come with their own flaws (a gimmick isn’t worth it if it causes dust to fall out of the vacuum when you turn it off), so the better way to search will actually be to find the best version of the classic, cordless handheld vacuum.

Which Cordless Handheld to Choose?

The best of these is the Black & Decker CHV1410L 14.4-Volt Lithium-Ion Dustbuster.  It has all of the features that you should expect from a good handheld vacuum: a Lithium-Ion battery, a translucent dust container so you can see when it is full, crevice and brush tools, and an Energy-Star approved charging station.  What makes it stand out as the best is how it shines in a couple areas in particular: power and charging.  This model has outstanding power for a handheld vacuum, rivaling even cordless stick vacuums, and sucks up messes far beyond what its voltage would suggest.  Its unique “smart charge technology” uses 50% less energy and charges five times faster than similar NiCad systems, and provides for a comparatively longer runtime.  All of this fits in a 4 pound package, which is lighter than most handhelds, and the Dustbuster features an extendable, rotating nozzle with accessories conveniently mounted on the side.  It is a slightly more expensive option, from a certain perspective it’s a bargain: it actually performs better in almost every respect than a similar Dyson model that is sold for three times as much.

That said, Black & Decker does offer more economical versions of the Dustbuster, if you want similar quality for a cheaper price.  Another 14.4-Volt model is available, and a 15.6-Volt as well, but just bear in mind – both have the less effective NiCad batteries and less power and a shorter runtime than the Lithium-Ion option.