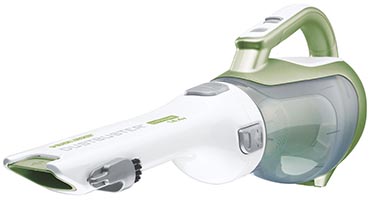 At first glance, Black and Decker’s CHV1410L Dustbuster 14.4-Volt Cordless Hand Vacuum looks a lot like some of the company’s cheaper hand vacuums – same shape, outwardly the same design, similar size – but it’s a good bit more expensive. Have they upgraded this Dustbuster enough to warrant that increase in cost? I’ll investigate it and see.

With 14.4 volts, this Dustbuster is off to a great start in terms of upgrades. Considering that cheaper Dustbusters get great performance from their power which is only two-thirds as much as this one’s with a very similar design, putting the power of a larger stick vacuum in a handheld is almost overkill…in the best possible way.

That power and design combination really shows in this vacuum’s performance: it has suction quite obviously like an upright’s. It would be a rare occasion with the CHV1410L for you to have to pass over a mess multiple times to make sure you suck it all up – powerful efficiency is the name of the game, here.

While the power upgrade is fairly obvious, the advantages of going with this model of Dustbuster are a bit subtle, but nice to have nonetheless. While the ergonomic handle is the same, the nozzle has been made longer to give you a better reach, and moreover can rotate to get the best angle for harder to reach messes.

With the battery, we go back to more obvious upgrades, namely a lithium-ion battery. This kind of battery, of course, is better in several ways than cheaper NiCad and NiMH batteries, and provides an almost ten minute runtime in this case – great for a handheld vacuum. The charging base, which rests on the floor or counter, uses smart charge technology to both charge the battery very quickly while using 50% less energy. If you’re looking to save some money and don’t need quick charging or a long runtime, you can instead opt for the otherwise identical CHV1410.

This Dustbuster model is admittedly much heavier than cheaper models, at 3.8 pounds. That’s not necessarily a disadvantage, however, when put in context: the cheapest models are incredibly light, and this one is only a little above average weight for a handheld.

I was a little disappointed in Black and Decker in regards to the filter – they stuck with the same cheaper, papery filter that is used in cheaper models. I suppose it is washable and affordable to replace, at least.

Since some of the cheaper Dustbusters have startlingly large dustbins, this model’s 20.6 ounce container might seem smaller. Again, though, it’s actually above average for handhelds, but in a better way than with its heavier weight.

One big upgrade is this model’s accessories. Or rather, I should say two: both a brush and a crevice tool are integrated into the nozzle itself, so there’s no worry about losing them, and they’re easy to flip into place.

With its lithium-ion battery and smart charger, this is one cordless vacuum you’ll thankfully almost never hear about battery issues with. Combined with Black and Decker’s sturdy construction, I fully anticipate this vacuum lasting past its warranty.

And speaking of the warranty, a two-year limited warranty is included. That fits this vacuum’s price range just right, in my opinion.

As with the weight and the dust bin, this Dustbuster is a little above average in price for a handheld. As always, though, consider the context!   It’s not that bad a price at all for a cleaning tool that works well and will probably last years.

The CHV1410L Dustbuster is really one of the better cordless handheld vacuums, to say little of it being the best of the various Dustbuster models. You are paying a little bit more to get the higher end of the Black and Decker line, but it’s really not as expensive as some handhelds out there, and you get some great features that make it worth it.